Dow tanks more than 950 points as Wall Street’s roller-coaster week co – GoldFinancial
This site uses cookies to learn how to communicate better with our website visitors and share the most relevant information. By continuing to browse the site, you are agreeing to the use of our cookies. Privacy Policy
Skip to content
Cart
#1 TRUSTED GOLD COMPANY IN AMERICA | CALL OUR EXPERTS: 888-915-2443 FOR DAILY SPECIALS

Authored by Yu Ling via CNBC.

Stocks plunged on Thursday, erasing most of the steep gains in the previous session, as markets remained highly volatile in the face of the fast-spreading coronavirus.

Fears about the coronavirus disrupting the global economy continued to grip Wall Street as countries around the world extended quarantines and travel restrictions. California declared a state of emergency after a coronavirus-related death and 53 confirmed cases in the state. The number of infections in New York also doubled overnight to 22 as the state ramps up its testing.

“The majority of this is just growing concern about the fallout from the virus because it’s spreading,” said Tom Essaye, founder of the Sevens Report. “For every hour, another group of people have it and it’s in another state. People are getting a bit nervous about this constant barrage of headlines.”

That angst fueled investor demand for safer assets like U.S. Treasurys and gold. The tumbling yields kept pressure on bank stocks, which led the major indexes lower. JPMorgan and Bank of America both dropped about 5%. 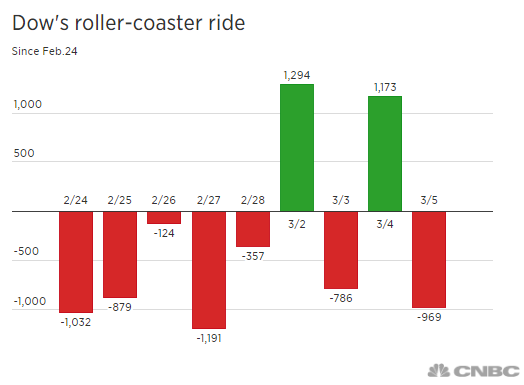 The market moves came amid a roller-coaster week on Wall Street, which saw the 30-stock Dow swinging 1,000 points or higher twice in the past three days.

The Dow posted its second-biggest point gain on Wednesday as major wins from former Vice President Joe Biden during Super Tuesday sparked a relief rally, especially in the health-care sector. Investors also cheered signs of a global response to the outbreak, including a more than $8 billion in emergency funding from Congress.

“The optimism coming off Super Tuesday has come and gone and we reverted to being driven by fear over the containment of the virus and the impact it’s going to have on the global economy down the road,” said Mike Loewengart, managing director of investment strategy at E-Trade.

On Tuesday, the Federal Reserve cut its benchmark interest rate unexpectedly by 50 basis points, citing that coronavirus “poses evolving risks to economic activity.” It was the central bank’s first such emergency cut since the 2008 financial crisis.

The move failed to assuage stock market concerns about the potential economic impact of the coronavirus outbreak and triggered sharp movements in the markets.

“Despite the rally in stocks [Wednesday], Treasury yields and gold prices did not respond in-kind,” said Matt Maley, chief market strategist at Miller Tabak. “None of the other markets saw the kinds of moves yesterday that would indicate that we’re out of the woods on the negative impact of the coronavirus. In other words, many other markets are still sending up warning signals.”

Investors will monitor a key jobs report on Friday for signs of any negative impact on the labor market from the coronavirus. The U.S. economy is expected to have added 175,000 jobs in February, down from 225,000 in January.

The weekly jobless claims data on Thursday underscored the labor market strength despite the outbreak. Initial claims for state unemployment benefits slipped 3,000 to 216,000 for the week ended Feb. 29. Economists polled by Reuters had forecast claims would fall to 215,000 in the latest week.

—CNBC’s Thomas Franck and Fred Imbert contributed to this report.

Lock and load with GFG Ammo. These 2 oz Silver Bullets are made of .999 Fine Silver and are modeled after .308 Caliber Winchester rifle ammunition. Bullets are modeled as replicas and are not intended to be fired.

Lock and load with GFG Ammo. These 10 oz Silver Bullets are made of .999 fine Silver and are modeled after .50 Caliber Browning Machine Gun ammunition. Bullets are modeled as replicas and are not intended to be fired.

Lock and load with GFG Ammo. These 1 oz Silver Bullets are made of .999 fine Silver and are modeled after .45 Caliber Semi-Automatic Colt Pistol ammunition. Bullets are modeled as replicas and are not intended to be fired.